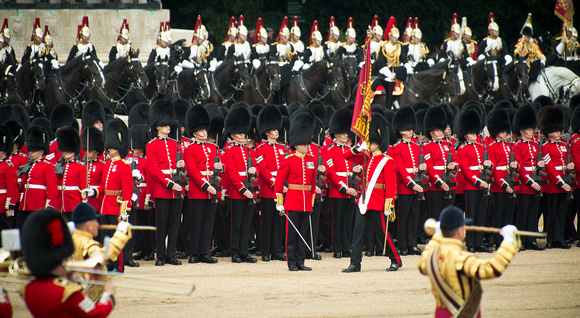 More than a thousand soldiers from the Household Division were on parade to mark the Queen’s Official Birthday on 14th June 2014 on Horse Guards Parade, at the ceremony known as Trooping the Colour. The Royal Colonels (The Prince of Wales, The Duke of Cambridge, and The Princess Royal) also rode on the parade.

This year it was the turn of Nijmegen Company Grenadier Guards to troop the Colour presented to them by Her Majesty The Queen at Buckingham Palace last June. The Colour is of crimson silk and carries 45 of the Regiment’s 77 Battle Honours. The earliest dates back to 1680, the most recent is for the Gulf War in 1991, but the Battle Honour of greatest importance to the Grenadiers on parade is that of Waterloo 1815.

The Field Officer in Brigade Waiting, Lieutenant Colonel Chips Broughton, Grenadier Guards, commanded the Parade. It is the first time since 2005 that the Grenadiers are not preparing for, on, or recovering from a tour in Afghanistan, but their programme is just as full. Since the last Queen’s Birthday Parade, elements of the battalion have trained or been trained in the Falklands, Brunei, Saudi Arabia, Estonia, France and Belgium. Later this year the whole battalion deploys to Kenya. Meanwhile the Coldstream Guards are in Kabul and the Irish Guards on duty on the Green Line in Cyprus.

There were more than 200 horses on parade, and more than 400 musicians from all the Household Division Bands & Corps of Drums marched and played as one. The famous Drum Horses of the Mounted Bands with their immaculately waxed moustaches were also on parade.

All the Soldiers paraded in the traditional ceremonial uniforms of the Household Cavalry, Royal Horse Artillery, and Foot Guards. Many more were working behind the scenes to ensure this, the most important parade of the year, went smoothly.

The Guards are among the oldest regiments in the British Army and have served as the personal bodyguards of The Sovereign since the monarchy was restored in 1
© MoD/Crown Copyright. The material may be used for current news purposes only. It may not be used,
User Agreement
Cancel
Continue