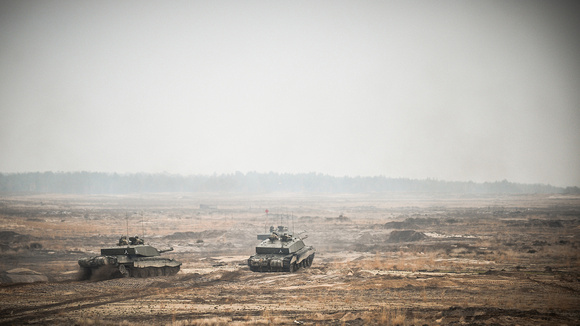 Ex BLACK EAGLE is a bi-lateral UK/Polish exercise and is a significant demonstration of the UK's support to the region and NATO's immediate Assurance Measures.

The King's Royal Hussars is the UK's Lead Armoured Battlegroup operating the Challenger 2 Main Battle Tank. The Battlegroup will total approximately 1300 personnel, 100 armoured vehicles and 250 other vehicles and will be the UK's biggest armoured deployment in Eastern Europe since 2008.

1st Battalion The Royal Welsh, which is also providing personnel and vehicles to the exercise, is the Lead Armoured Infantry Battalion in the British Army. The battalion is equipped with the Warrior Armoured Fighting Vehicle, enabling it to move swiftly around the battlefield delivering troops to the heart of the battle. Warriors are due to be transported from Tidworth to Marchwood next week and then onward to Poland.


Exercise Black Eagle is part of a NATO package to reassure allies in Eastern Europe. The Full battle group comprises 1,350 personnel and more than 350 armoured and other vehicles.

This commitment is Britain's largest to the region since 2008 and is one of a series of NATO manoeuvres that have taken place throughout the last few months in support of allies in Eastern Europe and the Baltic states.

The Defence Secretary (Michael Fallon)
"It is right that NATO members and partners demonstrate our commitment to the collective security of our allies in Eastern Europe, so I am pleases to confirm our participation in these exercises. In particular, the commitment of a battle group to Exercise Black Eagle shows our sustained and substantial support to NATO's eastern border.
© MoD/Crown Copyright
User Agreement
Cancel
Continue